Cheating has been around since the beginning of time. Whether it is athletes using performance-enhancing drugs, students cheating on exams, or politicians lying to the public, people have always found ways to get ahead dishonestly.

Also in video games cheating is unfortunately common, by using various methods to take advantage oneself over other players. This can include techniques such as cheating through the use of mods, hacks, or exploits; or simply playing the game in an unintended way that gives an unfair advantage. It can be performed on single-player or multiplayer games. In multiplayer games, cheating can involve either manipulating the game itself to gain an advantage or playing with other players who are cheating.

To prevent cheating / hacking or manipulating your game data and memory, GuardingPearSoftwares AntiCheat was developed.

What does GuardingPearSoftware’s AntiCheat do?

GuardingPearSoftware’s AntiCheat implements the client part of an AntiCheat system. It protects the game memory and stored values like the unity PlayerPrefs. Also, it makes sure nobody manipulates the game time or speed to achieve advantages. Adding this protection can be done manually, but also automatically if you want to. 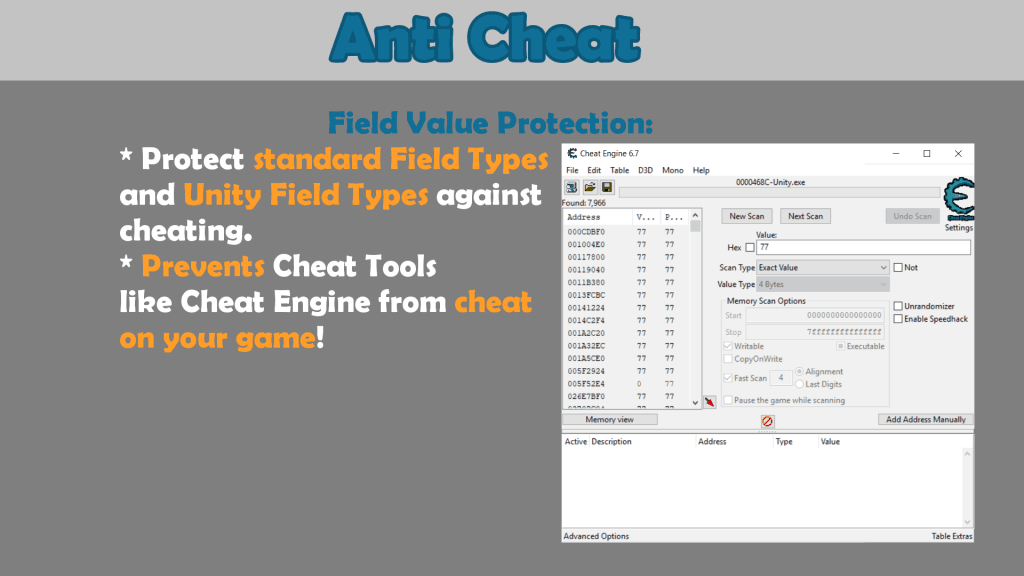 Stored Value Protection:
Protect the content of the PlayerPrefs against modifying!